I don’t know when my dream of publication began; the earliest mention of it in my journal comes from high school. In “Mckay Recycled” by my college friend Mckay Coppins, he points out, “The thing is, I don’t think you can be a writer—whether you’re a journalist or the guy who writes the hazard signs for every ride at Disney World—and not dream of seeing your name on the cover of a book.” Now, a decade after I graduated high school, writing and dreaming the whole time, my first book is finally coming to print.


One of the few non-Pokémon stories that I began in middle school was about a group of kids who each personified a different element, represented by a different color. I titled it “Rainbow Warriors” (my friends had to point out why this might not be an appropriate title). I never got further than a few chapters, after the yellow-electricity girl was forced to go swimming for PE and had to be rushed out of the water by her other magical friends before she exploded and zapped everyone. The idea lived on in my imagination, though, and the abilities of the different groups became clearer with each daydream.


All through college, I had been working on a story about teenagers who are on their own after the electricity in their desert town runs out. I edited and polished, but the basic plot was too much like a daydream and not enough like a publishable novel, and eventually I abandoned it. Soon after, I had a dream where the color-element kids were royalty, running away from bad guys through a castle and jumping through hidden doors in unlikely places (like the refrigerator). I played with the idea, wondering which clan different family members would be in, and it developed into a story. (Which are you? Find out here: http://www.thespectrabooks.com/clan-quiz


For around three years I worked on the new story, which I called The Specta: Seeds of Light. I was learning a lot about writing, checking out books from the library, even attending the Utah Writer’s Conference. I sent a few query letters to agents. For readers of the Spectra books, that first book followed Keita Sage as she learned about her arranged marriage, met the other royal heirs at the Summit, travelled to Brian’s home in Muselands, and finally survived the Stygian takeover. Here is one of the plot descriptions for Seeds:


*      *      *
Keita Sage is a Sprite, one of six clans with different super-natural abilities. She can change form, heal wounds, and beat her brother in tree-climbing contests. But her ties to her homeland are about to be severed as her father, engulfed in politics, decides to marry her off to another clan. Leaving her kingdom for the first time, she finds more than new friends, new cultures, and new boundaries to cross. Investigating the other heirs leads her to discover the Stygians, an ancient society scheming against the clans.


Keita is tired of being sheltered, and she’s determined to find out more about this threat. But can she leave her homeland, where her brother and sister are among the Stygians’ targets, to seek the help of another kingdom?

In between rejections, I started work on the sequel. I had gotten a few chapters in when I realized that the entire first novel was nothing but backstory, and the whole thing ought to start with the sequel I had just begun. So, I started over, and in about a year I had the working draft for the new version, ‘The Spectra Unearthed’. I also worked on all the extra fun stuff, from maps to family trees to computer graphics of the characters. 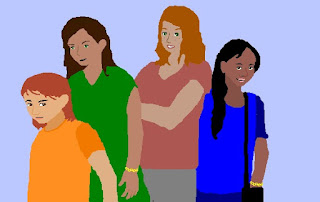 Again I started looking for agents. The lack of internet at home and addition of children to our family slowed me down, but a year and forty queries later, I started thinking about other pathways to publication. I decided that reaching a huge audience through a traditional publisher was not necessary, so I started researched self-publication. In the past, self-publication meant purchasing hundreds of copies of your book and trying to sell and ship them all yourself. Now there is another option, called POD publishing, which can print small numbers at a time and ships them for you. I researched many companies and decided on Booklocker.com. I liked that they not as expensive, had a wide-reaching audience (especially for ebooks), and required a quality check that meant that they had a good reputation for selling decent material. So I sent in my novel and was approved.


The first step, after signing the contract, was to reread my story. I’d edited it many times during the year that I was searching for agents, but I decided to do one last in-depth edit, especially looking at details and word choice. My husband and I did this polishing together. We also figured out what bonus material to use (the acknowledgments, appendix, title page, etc.) I also started working with a cover designer. I had drawn a few covers on my own, but I knew that they were not high quality enough.

I gave the designer the text for the back of the book as well as a list of images that were important in the story, and he assembled them together. I’m picky about human figures, probably from drawing them pixel by pixel, so we decided to leave them out of the final cover: 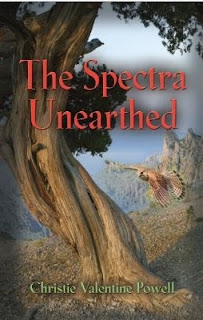 I also started working on the website. I chose to make one for the series instead of for me as an author. The series will have six books, plus possibly another couple that fit in the same world, so I figure I have plenty of time before I think about publishing something else. I wanted to post some of my extra material that I’d created in making the Spectra world. I researched website hosting companies but eventually chose webs.com, which I’d already tried out with a free site for my homesteading attempts (see insert). I paid for the premium service, and I went to a separate site to buy my domain name to make sure that it was private. I published the website at www.TheSpectraBooks.com about a month before the book came out (in retrospect, I probably should have waited a few more weeks).

It took a few weeks to get everything together: the cover from the designer and our fully polished manuscript. Then we sent it all in, and Booklocker sent it to the printer. My first copy arrived in the mail about a week later. We read it and approved it (although there were a couple small things I would have liked to change if it didn’t cost so much), and then the publisher put the book up for sale!


Now I’m in charge of getting the word out and trying to promote it. Some of the things I’m working on include:


The goodreads page at https://www.goodreads.com/book/show/26223317-the-spectra-unearthed?from_search=true&search_version=service


A YouTube video of me reading the first chapter at https://www.youtube.com/watch?v=JKpXDDMqWw8
Posted by Christie V Powell at 11:19 AM

Christie V Powell
Christie Valentine Powell wrote her first story in second grade and has been writing ever since. She loves writing fantasy, where she can make up her own rules. All of the Spectra books take place in the same fictional world, where elemental abilities are divided into six magical kingdoms. Her other hobbies include making toys, hobby farming, and daydreaming. She lives near the sunniest city in the world (Yuma, Arizona) with her husband, children, and many critters. I'd love to keep in touch! Find "The Spectra Books" on most social media.