Every author and writer has a different process for drafting and editing. They go through a different number of drafts or stages before getting to the book you see on the shelf. This is my process:

Usually I use NaNoWriMo to get this draft down, though in grade school I used a notebook for the same effect. For the rough draft, you are not allowed to stop and edit. You have to churn out a certain number of words a day, and it's not going to be pretty. It's a mess that you cringe to think of anybody ever looking at. It might even include passages like these (from a yet untitled novel about griffins):

Tyra rolled her eyes. “What about the other women in the vale?”

“Aren’t any. White Leader’s a top hunter. He gets first pick of humans, and until Runa he always went for males.”
#It seems like all this explanation should be earlier. Or maybe not.

His other two picks were both men, tall and strong. Both were fishermen. Name1 had a wife and two youngsters at the village. Name2 was older, with his four children all grown. None of them spoke to each other.

The chain that had been attached to her collar lay in a corner.
Edit: she’s still wearing it.
Tyra examined it.

A girl screamed again. Tyra was getting tired of the screaming, though her heart had sped up again without her permission. (I counted the word 'scream' ten times in this section).

Since I am not allowed to edit, I sometimes go back and add a line explaining the changes that I'd like to make. Occasionally I include several paragraphs brainstorming how this section ought to go, or outlining what I think should come in the next couple sections. The rough draft has no chapters, but I do have heading titles to help me find the sections quickly.

Again, the rough draft is for nobody's eyes but mine. If you're working on NaNoWriMo, congratulations! You've got a start! But please please please do not assume that you have a full publishable story on your hands. Yes, amazon will publish it for nothing, but it gives indie authors a bad name.

Ahem, coming off the soapbox...

This draft takes the longest, often several months. I start by listing out every scene in the novel with a few key words. For example, here's the first chapter of The Spectra Uprooted:

I move these clips around into chapters and add in a few lines for scenes that I think ought to be added.  My goal is to have the story build to a climax in each chapter, with all of the scenes in that chapter adding up to it.  Once I've got this guideline, I fill out the scenes that I've described that still need added. Also, because I'm slightly OCD about page numbers, I keep track of chapter length on an excel sheet, which I've already described. I also make the changes that I noted during the rough draft.

When I'm almost done with the first draft, I go back to the beginning and read each character's voice as if I were doing an audiobook. This helps me make the characters' dialogue distinct from each other.

By the time I am finished with the first draft, I have a decent story that I am willing to share with beta-readers. The plot and characters are in place and in order. Going over each scene allows me to rewrite most of it, so some of the more awkward prose gets corrected.

The prose draft mostly involves cutting extra words to make the story flow better. Red flags of words to change include could and 've had to, -ly adverbs, passive voice, etc.  I like to use prowritingaid for a free analysis of my first few pages, looking for problems that I'm likely to find in the rest of the work. After working on the computer, I request a physical copy from Staples, where the extra words are more obvious. Here's a page from The Spectra Uprooted: 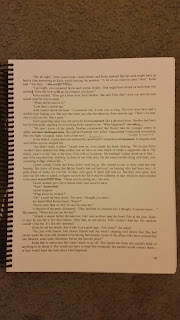 This copy can also be shared with beta-readers. I can leave it with friends to add comments.

After I make the changes I've marked on my physical copy, I format to the correct page size and add the maps, acknowledgments, and other material. Once this is done I start working on the cover, which means that I can't make any more major changes without risking a change to the cover's spine width. My beta reader and I go over it one more time and then I request the proof copy.

There's nothing so exciting as getting the proof copy in the mail! At last, it looks like a real book! 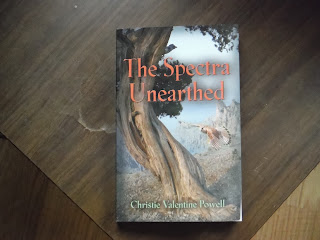 Now I get to read the whole thing, pretending I'm a reader. I also circle small changes and especially typos that need fixed. I might have to add a label to the map or make sure all the fonts match. And, if I'm designing my own cover, I check to make sure that's working (if not, I have to order a proof all over again, which is not fun).

From start to finish, this process takes about a year to complete. I choose my own due date when I first start writing, usually my angel baby's birthday (September 5th). That gives me time to work on marketing and side projects and preparation before NaNo comes around again.

So, there's my writing process. What's yours?

2021 Note: The books I used as samples are now published. Mira's Griffin changed quite a bit since those snippets! Keita's Wings (the new title for my first series, of which The Spectra Uprooted is third) is now complete. I've written a new blogpost with more information about my writing process, along with changes I've made in the past four years.